Mars on Earth. Sands and rocks of the island of Hormuz

If you have ever dreamed of visiting Mars to walk among the red mountains and valleys, you have this opportunity. And you don't have to wait for Elon Musk to invent a suitable aircraft. It is enough to get to the Iranian port of Bandar Abbas in the Persian Gulf, and from there about half an hour by boat to the small island of Hormuz. Ormuz is really small - about 8 km at its widest point. One of the localities is a fishing village in the North of the island. Attractions include an old Portuguese fortress, a local artist's gallery, and incredibly beautiful multicolored landscapes that look like a silk Persian carpet or the plumage of a bird of Paradise. This modest island is a haven for artists and geologists. Researchers counted about 85 shades of red, yellow, blue, green, white, gold and other colors in the rocks and beaches of Hormuz. The reason is random combinations and combinations of various rocks and minerals, including iron oxide and common table salt. On the surface of the island, volcanic and sedimentary layers are intricately mixed, forming a strange and unusual mosaic of colors and textures. 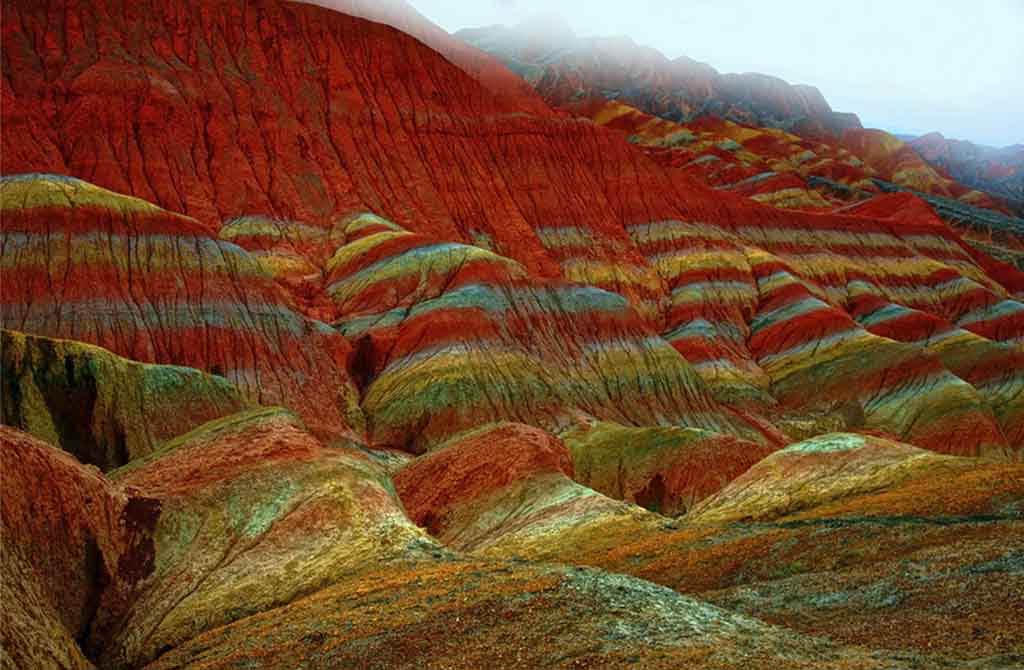 The highest red mountain is located in the South of the island and is called Gelak. The height of its peak is 200 m. There are beaches on the island with completely red sand, from which the water itself takes on a slightly sinister hue. So the sea here is also quite Martian. If in the XVI century (when the island still belonged to the Portuguese) on these beaches got lady Bathory, famous for her love of bloody Spa procedures, it may have saved a number of lives. After a walk on such a beach, clothing also becomes a shade of ochre. Unlike blue, green and Golden soils, which are purely aesthetic and attract tourists, red ochre soil is also of economic importance for the inhabitants of the island. It is added as a seasoning to local fish dishes (keep this in mind when you make an order at a local restaurant), used for coloring glass and ceramic products and making paints, including cosmetics. The red soils of Ormuz contain about 70% iron oxide, so It is considered one of the world's largest mines. The second valuable resource of the island is salt. There is also an abundance of it here. The volcanic island itself stands on a salt dome. If you put your hand in the water, which is in small quantities, but is present in different parts of the island, it will soon form a salt Deposit.
In the southern part of Hormuz, there is an entire salt mountain called Elahe namak (the Goddess of salts). In addition to the color, it attracts tourists with an unusual relief formed as a result of erosion. You can get here with guides by car or motorcycle (this is the main transport of local residents). And another unusual attraction that is worth a look if you are on this island, the largest soil carpet in the world with an area of 1200 m2. It was created in 2008, contains 70 different shades of soil and is called the "Persian Gulf".

Of course, Ormuz is not as deserted as Mars, but there are few tourists and locals here. So, if you like clean beaches, bright colors and cosmic landscapes and you are not attracted to Eastern bazaars and active resort service, this island is what you need.