My second Mom: five stories about animals who raised foster children as their own!

Every child needs love and care. Unfortunately, it sometimes happens in nature that babies, for various reasons, remain without parents. We will tell five vivid stories about animals, proving that parental love knows no boundaries and species.

1. Cat-father . In Anapa, a homeless cat saved six puppies from death. He warmed the babies and fed them the mice he had caught. An unusual family was discovered by volunteers from the "Good Hands" community. They were found thanks to the efforts of Kotopapa: he meowed loudly, trying his best to attract people's attention. Volunteer Ekaterina Balanenko took the cat and puppies home and gradually placed them in good hands. The cat found the owners last. He received the noble name of Marquis and is happy in his new family. He doesn't catch mice anymore.

2. Kate and Pippin. This story happened in Canada. Photographer Isabel Springett picked up a little fawn girl who was left an orphan. The baby was named Pippin. Unexpectedly for everyone, Kate's dog, who lived with Isabel, took care of the fawn, who began to consider her mother. When Pippin grew up, she began to spend most of her time in the woods with her herd, but often came to visit Kate to play, cuddle and lie down together on the litter. In 2012, Isabel's brother, Martin Stringett, wrote a book about this unusual relationship, Kate and Pippin: An Incredible Love Story.

3. Hippo and turtle. No one expected the manifestation of maternal feelings from the turtle, because the care of offspring for most of them ends after laying eggs. But there are exceptions. 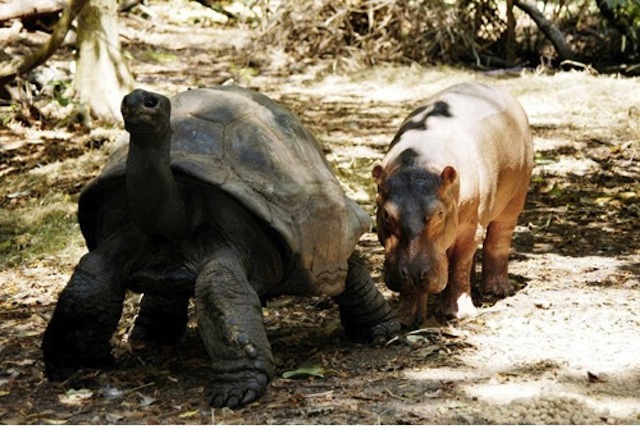 In 2004, a tsunami occurred in Kenya, which left a little hippo orphaned. The 300-kilogram baby was picked up by the staff of the Mombasa Nature Reserve. He was named Owen and placed in an aviary with a 130-year-old turtle Mzi. At first, Mzi was not thrilled with such a neighborhood, but Owen liked her very much, and he tried his best to get her location. In the end, the turtle's heart melted, and she became a hippo mom and best friend. Owen and Mzi have their own website, and a book has been written about their friendship.

4. The purring squirrel. Yes, it happens too! Emma and Jim Watkins picked up a newborn squirrel that fell from a tree. To save the baby, they gave him to their cat Emmy, who recently gave birth to kittens. The appearance of an additional child did not bother Emmy, she accepted the squirrel into the family and began to take care of him along with the rest of the kids. The funny thing is that the squirrel, who was named Rocky, seems to have begun to consider himself a kitten and learned to purr loudly when he is picked up!

5. Mother is a lioness. In the Samburu National Park in Kenya, there lived a young lioness named Kamunyak. She is famous for taking orphaned oryx antelope cubs under her care. 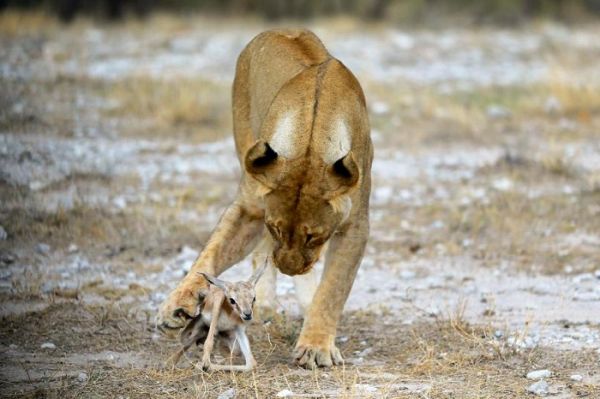 The lioness took care of the kids, behaved with them like a caring mother, and protected them from other predators, constantly being around. At the same time, she stopped hunting and even refused pieces of meat thrown by the reserve staff, who were worried that the lioness was weakening from hunger. It looks like she just couldn't act like a predator and take care of a herbivorous baby at the same time.

Because of this, the first story ended sadly: the weakened Kamunyak could not protect the cub, and he became the prey of another lion.

Other small oryx, which Kamunyak "adopted" (there were 6 of them in total), were taken away by the reserve staff to be handed over to mothers for whom caring for herbivorous cubs is not related to refusing food.

In 2004, the lioness disappeared, and nothing is known about her fate. We hope that she was able to have children of her own and was happy taking care of them. In the case of Kamunyak, the intervention of the reserve staff was caused by concern for an unusual lioness and her charges. But it often happens that, trying to help a chick that has fallen out of the nest or a cub calling its mother, people do them a "disservice". Not all animals are ready to take care of a baby that smells like a person, and the cub left alone is doomed to death. If the baby is not in obvious danger, the best tactic is not to interfere and let the parents take care of his well-being themselves. Therefore, before helping a wild animal, make sure that it is really necessary!