In the wild, every living creature has its own proven tactics to get food and defend against enemies: speed, strength, sharp teeth and horns, the ability to blend in with the environment… Some animals managed to make sure that the predators themselves avoided them, and the prey, even larger and faster than the hunter, did not have a chance to get away. To do this, they have a universal remedy - poison. Science knows 5000 species of poisonous creatures. Here are some of them: 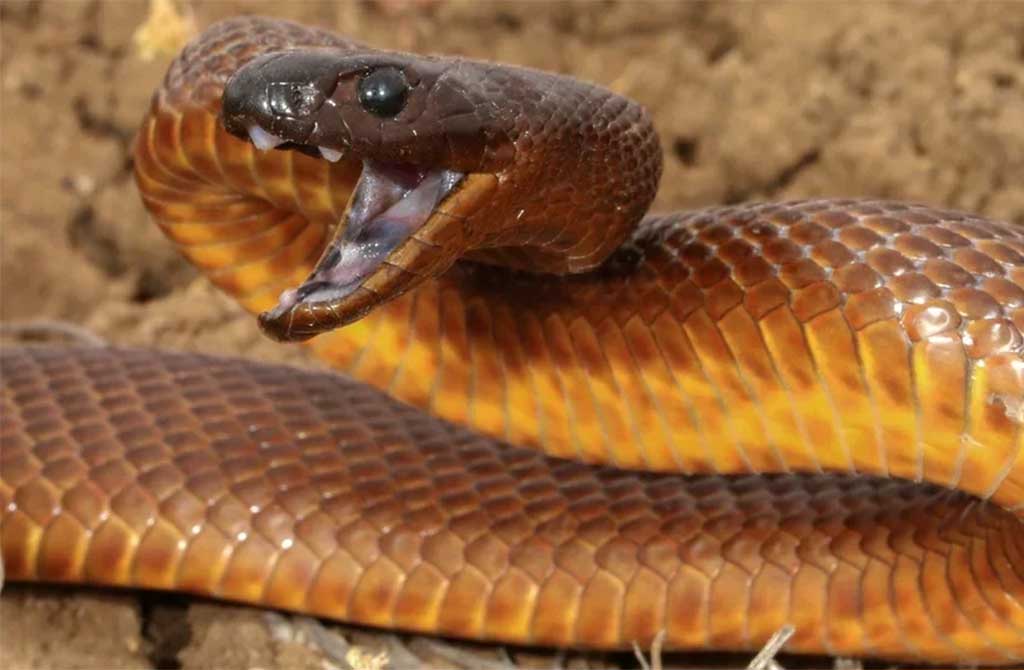 When it comes to venomous animals, snakes come to mind first. Taipan McCoy is also called the "cruel snake". If we talk about character, this is not true. The taipans that live in Australia are secretive and prefer to hide rather than attack. But if we talk about the properties of their poison, this name is justified. It's 300 times stronger than Cobra venom. One bite contains the amount that can kill 100 people or 250 thousand mice. It belongs to neurotoxins, that is, it acts on the nervous system, paralyzing the victim. Fortunately, there is an antidote for it. 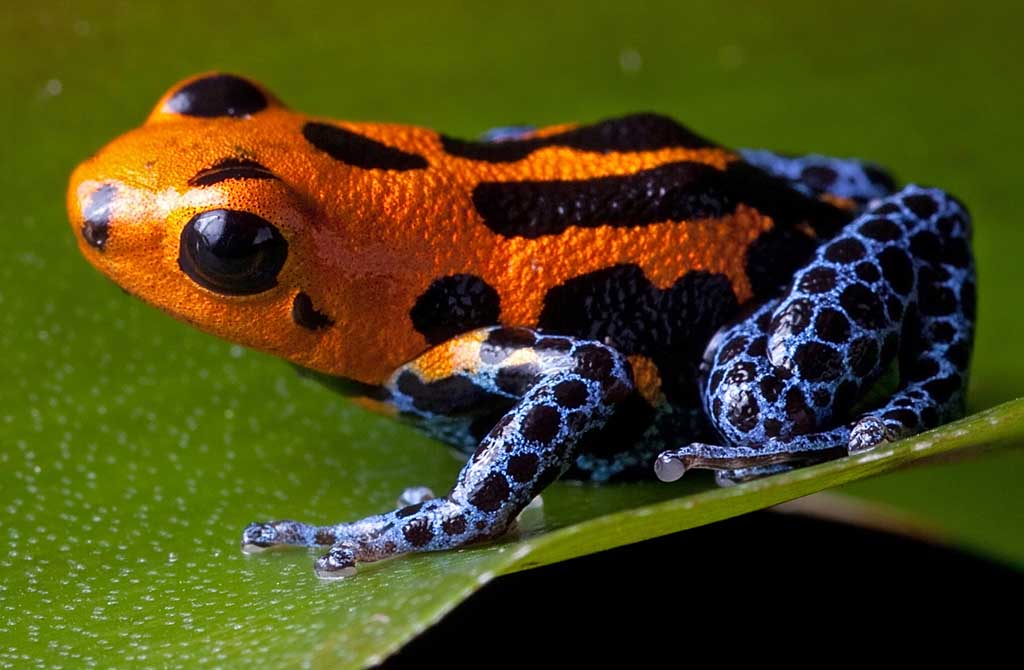 These tiny multicolored frogs live in the rain forests of Central and South America. Their body size is no more than 5 cm, but it contains enough toxin to kill 10 people. Local tribes used the poison of these frogs, batrachotoxin, to lubricate the arrowheads. 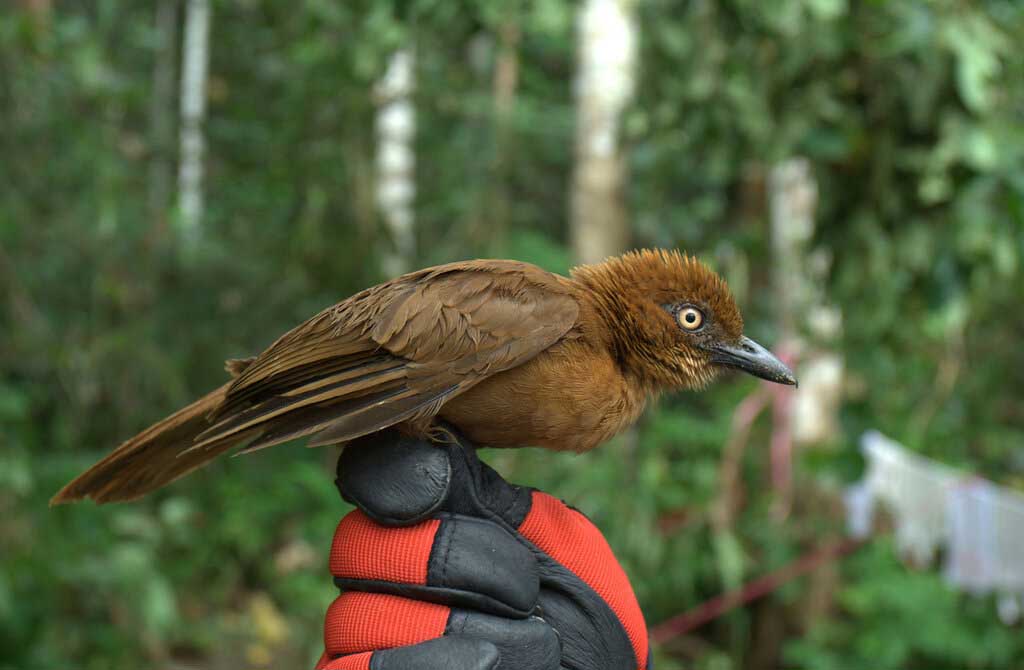 The same poison is infused into the body of a bird that lives in the forests of Australia, Indonesia and southern Guinea - the Shrike Flycatcher. Of course, a person has fewer opportunities to touch a bird than a frog, but this is also not recommended. The birds themselves do not know how to produce poison, they become poisonous by eating toxic beetles. When you switch to a different diet, they become harmless. 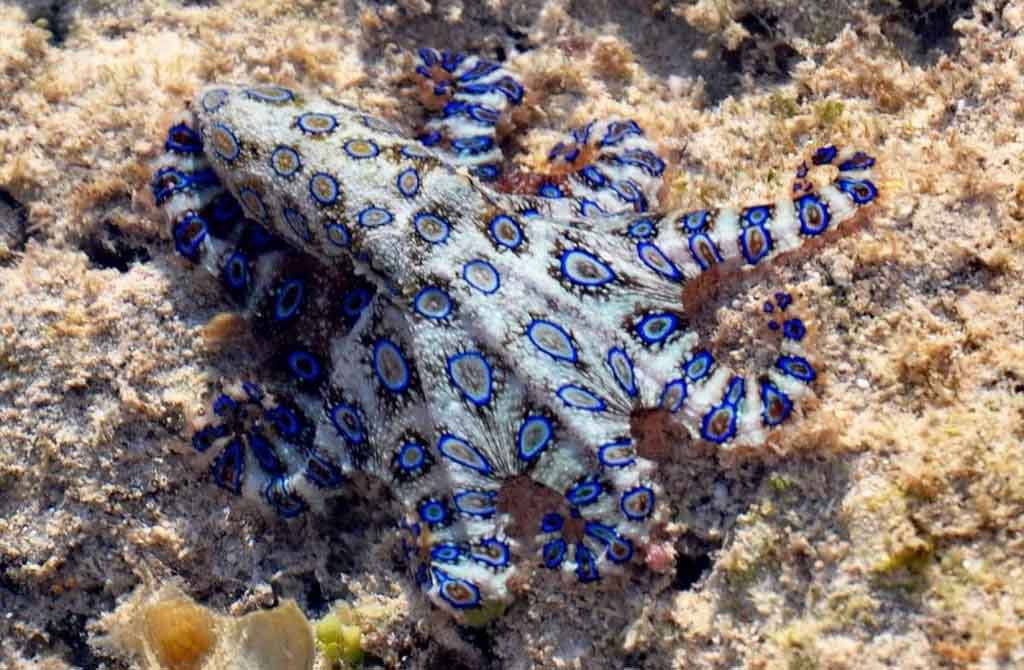 The blue-ringed octopus lives off the coast of Australia. The body of this cephalopod is decorated with bright blue rings, giving it an elegant appearance. He can afford such an immodest coloring, because there is enough poison in one octopus to kill 26 adults. Therefore, there are few people who want to hunt it.

There is an antidote to this toxin, but measures must be taken quickly, otherwise the victim will suffer paralysis and death from cardiac arrest. 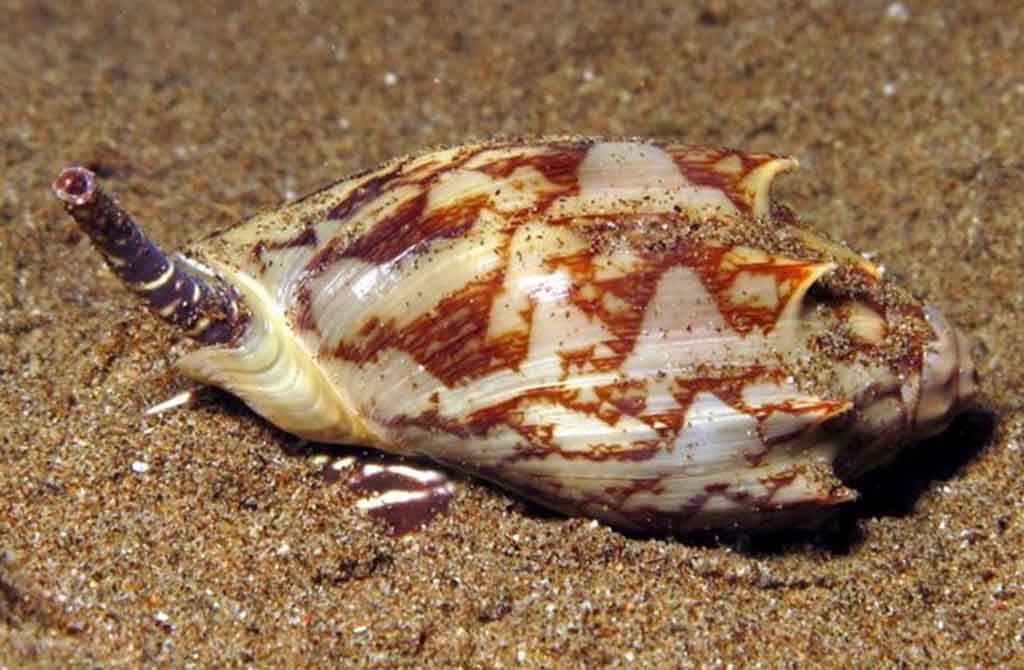 Cones are predatory marine mollusks. Their venomous teeth, like Darts, shoot at the victim. The venom of the cone paralyzes it, and the snail slowly eats its prey. Since mollusks are not the fastest predators, the toxin must be particularly strong so that the victim does not have time to swim away. These needles can penetrate a wetsuit, so divers should not swim close to the cones, much less take them in their hands. Their shells are very beautiful, so not everyone follows these recommendations. The most dangerous one is the geographical cone. Its poison kills a person within 2 minutes. The antidote has not yet been found. 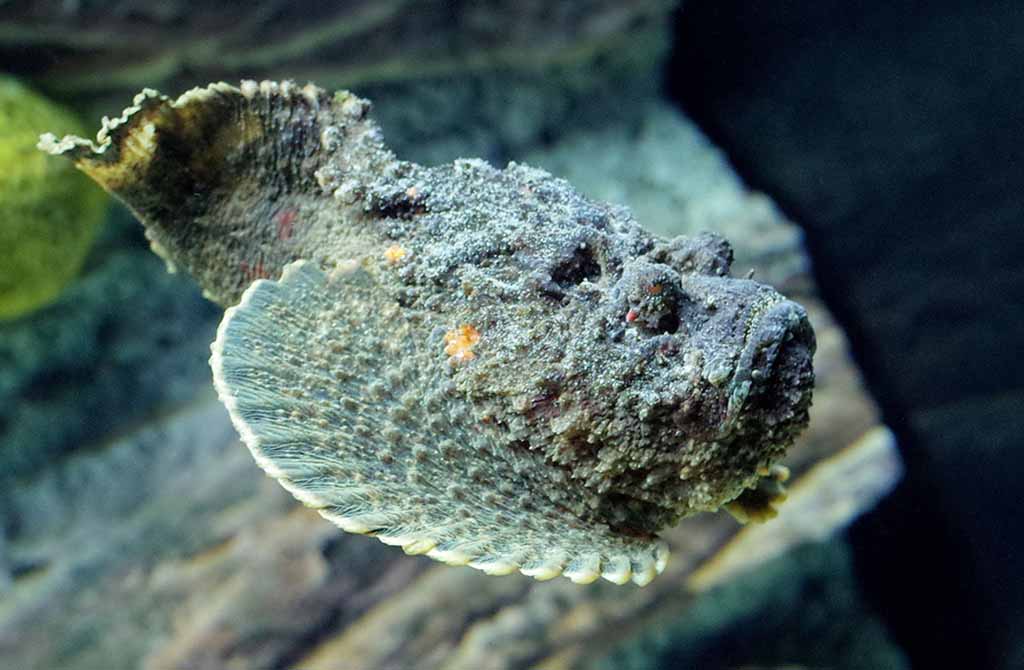 Not always poisonous creatures have a bright warning color. The stonefish, or wartfish, is considered the most toxic fish, and at the same time a master of disguise, which makes it even more dangerous. It does not hunt people or seek out them, but it disguises itself so well as a rock that it is easy to step on it and get pricked by one of the 13 dorsal spikes. The injection is accompanied by severe pain, tissue death and paralysis. This fish lives in the coastal zones of the Indian and Pacific oceans and the red sea. 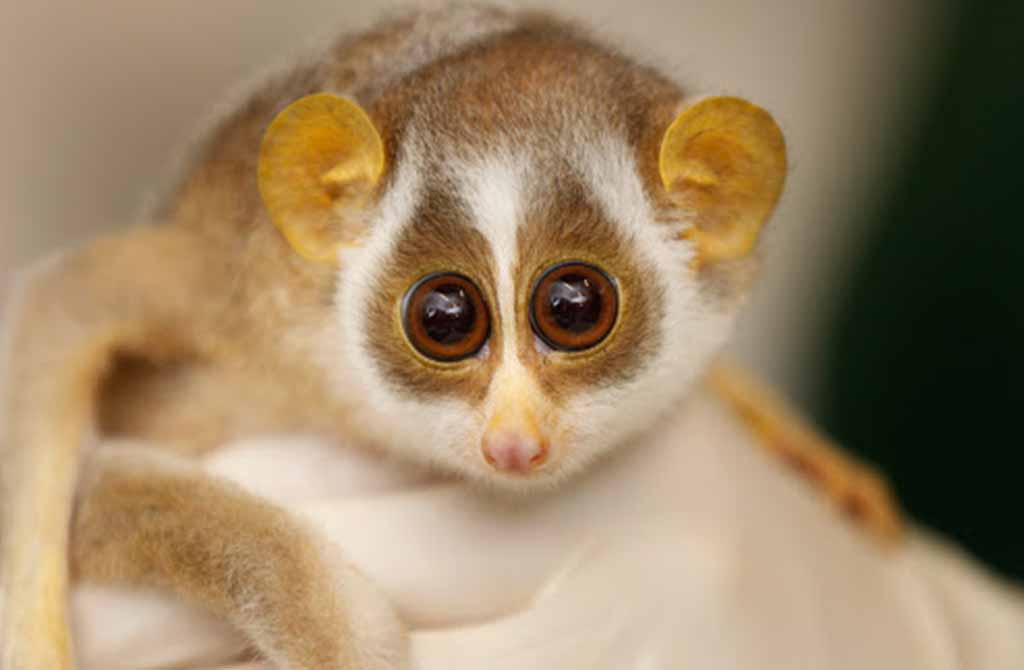 Not the most venomous, but definitely the most unexpected animal in our selection - fat Lori. This cute nocturnal Primate lives in Southeast Asia. Fat Lori is the only venomous Primate on the planet. Poison is secreted by special glands on the forelimbs. To scare off predators and destroy parasites, Lori smears it on the skin and often licks it, making its bite poisonous. Lori's venom is strong enough to kill a person within 30 minutes. 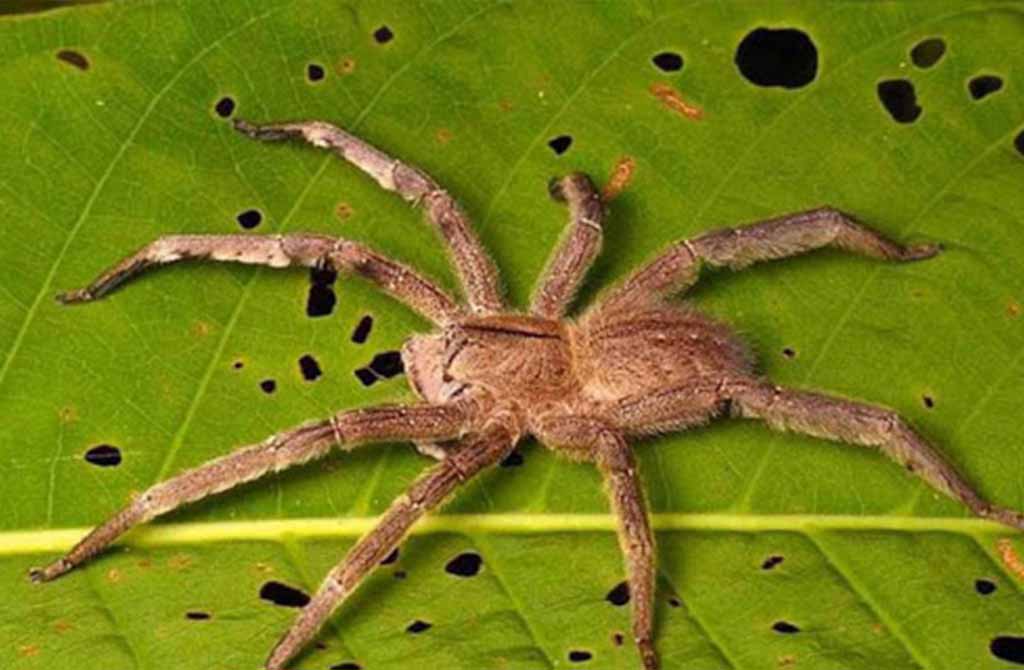 The Brazilian wandering spider was listed in the Guinness book of world records in 2007 as responsible for the largest number of human deaths. This species is distributed in Central and South America.

Unlike its relatives, it does not sit still and does not spin webs. The main problem is that he likes to settle in people's homes, getting into cabinets, boxes with shoes and even shoes. Therefore, it is very easy to encounter it. The disturbed spider becomes aggressive and can bite a person. Its venom causes paralysis of the respiratory muscles and respiratory arrest 2-6 hours after the bite, but there is an antidote, and an adult healthy person can be saved with timely access to a doctor. And for children and people with weakened health, the venom of this spider is deadly. 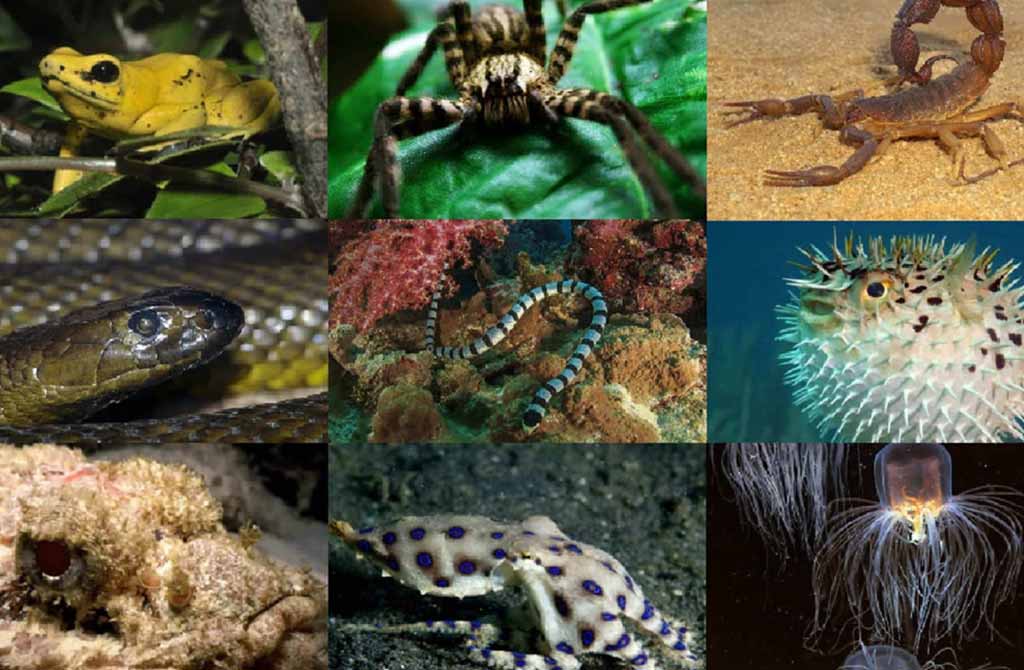 Most venomous animals do not perceive humans as prey, but can cause serious harm if they sense danger. Therefore, in order not to suffer from contact with them, it is enough to look carefully at your feet and not touch unfamiliar living creatures, even if they look very attractive. Treat animals with respect and they will respond in kind.